David Pratt is currently part owner and operator of the Warburton Holiday Park in the Yarra Valley.  He and his business partner, Simon Edwards, purchased this park in December 2015.  Prior to running the Warburton Holiday Park, David and Simon owned and operated the Bright Pine Valley Tourist Park in Bright, Victoria. Before venturing into Caravan Parks David and Simon were Certified Financial Planners and operated a very successful Financial Planning Practice in Melbourne. David is a Justice of the Peace, Vice President of the Warburton Advancement League, had served 16 years in the Army Reserve. David has served on the Committee of Management for Victorian Caravan Parks Association since 2018 and was elected President in 2021.

Sam Cohen (Operations, Land Lease Communities) joined Stockland in May 2020 and has now been involved in business operations, customer service delivery and commercial management for over 25 years. Sam joined Stockland to support the development, launch and operations of their entry into the residential parks business across the eastern seaboard of Australia. Prior to joining Stockland, Sam was the Head of Operations for Lifestyle Communities for nearly nine years.

Sam has served on the VicParks Committee of Management for five years and is in his third year of being the Vice-President of VicParks.

Torquay Holiday Park: Miguel Del Rio is an achievement focused communicator combining commercial management and strategic experience with financial, organizational and analytical acumen.  He has over 38 years management & finance experience in large, medium and small sized organizations including multinationals. Miguel is the managing director of Mexicala Pty who operate seven Caravan parks based across Victoria, New South Wales and Queensland, whilst also serving as a VicParks Committee of Management since 2007.

Josh is a second generation leader at Park Lane Holiday Parks. Park Lane Holiday Parks operates several properties around Victoria, encompassing residential, tourism and mixed use caravan parks. Before joining the family business in 2012, Josh completed his Bachelor of Business and Commerce with Honours, then moved into several Accounting and Finance roles. While Josh is involved in many aspects of the business, he has a focus on finance, strategy and projects. Josh has served on the VicParks Committee of Management since 2017.

Roger Humphris owns and operates Beechworth Lake Sambell Caravan Park with wife Sue, and they have been in the Caravan Park Industry for the past 15 years. In 2009 Roger took over the role of North East Division Chairman and began as a regional delegate on VicParks Divisional Council the same year. As a result of his tireless regional contribution to the Association Roger was elected onto the VicParks Committee of Management in 2014. 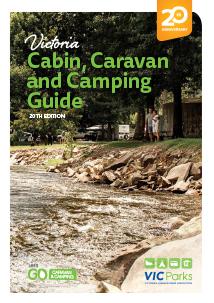